The Butterfly Visitor and Passenger

The “Red Admiral” is supposed to be a sign of June, so maybe April just had it all distracted.

Busse Library has a covered atrium at its entrance.  When I got ready to leave around 4:30 this afternoon for the bike ride home, a butterfly was frantically flitting about my bicycle.  I unslung my camera to try and capture its image.

It wasn’t cooperative.  With my Nikon on action setting, maybe I could have caught it, but the Kodak needs a little time think, far more than this frantic flying insect would give it.

The irony is that it was around 50 degrees, cloudy and cool—it was amazing that the butterfly could move at all, let alone dash about like a mad thing.  My theory is that the atrium itself both warmed it and confused it—it kept flying at the glass as if it would fly through.

At one point, it flitted next to my face and landed on my helmet by my left eye.  I tried to point the camera at myself, while it was perched there, but, flit, it was off again.

Where I would crush it if I put my bag in its usual space.  I took camera out again and snapped its photo. Now it was still and easy to shoot.  So still that when I stuck my finger in to gently nudge it out of the way, it languidly crawled, refusing to take wing.

Well.  I moved it under the light, placed my bag in my basket, and took off across campus.  Near Warde Hall, curious about how my passenger was enjoying its ride, I briefly stopped.

And flit.  Like a passing dream, it shot off, crookedly but rapidly and silently going on its way.

Fly on, cool Red Admiral.  And I like to think I had a small part in rescuing you from the entrapment of an atrium.  Hope you find somewhere to shelter in the frosty night so you can herald June.  In June. 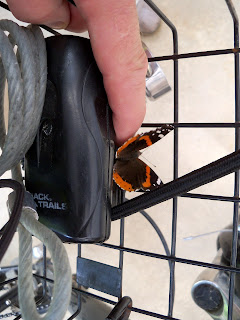 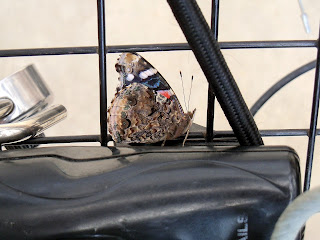 CR Joe
My name is Joe Sheller. I am a professor at Mount Mercy University in Cedar Rapids, Iowa. I've been biking since my dad bought me a one-speech Schwinn for my 8th birthday in 1966. I was a journalist before becoming a professor, and yet I still think of myself as a loyal American. Go figure.